The stock market keeps going up and it likely will for the time being until expectations turn negative. We’ve discussed the expectations that appear to be driving the market right now. Namely, the Federal Reserve has investors’ backs. If things get too dicey, the Fed will step in and serve as an artificial price floor. Whether the Fed can do this into perpetuity doesn’t appear to be relevant right although maybe it should be. That’s a discussion for another post. The other driving expectation is that the economy is on the mend from a very deep recession and will be back on its feet in one to two years. Whether that expectation holds is also a discussion for another post. The main takeaway is the S&P 500 is in an uptrend and is within one-percent of the all-time highs established in February of this year, which in and of itself is remarkable.

Anyway, I wanted to share a few things that stood out to me last week and continue to stand out to me today.

First, per TLRAnalytics, after two consecutive months of strong job growth (9.3m jobs added), we’ve only replaced 42% of the 20m plus jobs we lost in the February to April time frame. We still have a long way to go to put all of those people back to work. This data point raises all sorts of questions such as: 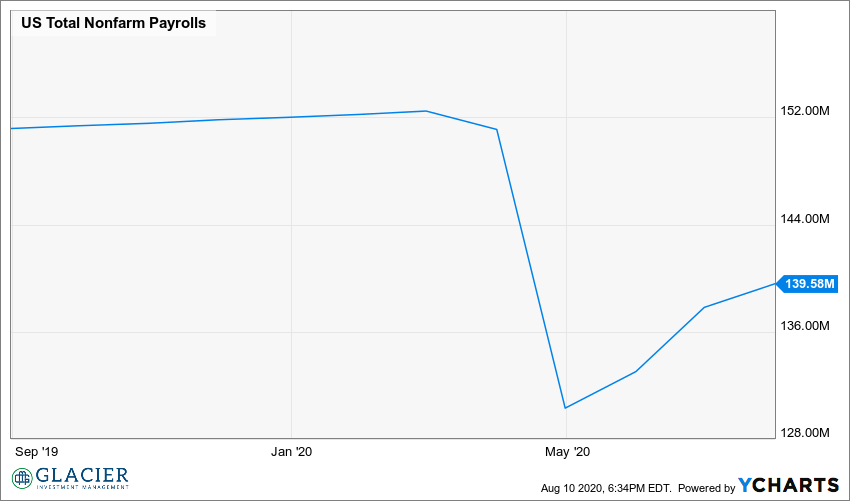 Second, according to the Brooking’s Institutions Fiscal Impact Measure, government (federal, state and local) added a net 14.6 points to 2Q20 GDP growth. In particular, the federal government added 21.4 points (state and local government had a negative impact). This point obviously ties in with my first point. Government assistance is critical right now to individuals, families and to the economy at large. Questions that come to my mind related to this point include:

The final thought I wanted to share was a graphic from a WSJ article last week regarding the housing market. I’m sure you’ve heard, or even experienced, the housing market is a seller’s market. That obviously depends on where you live. Where I live (Kalispell, MT) it is definitely a seller’s market given the influx of out-of-state people looking to be in a less dense and fairly tame COVID geography. The lack of listings is also a big contributor to the overall trend as I’m sure is the case in many other markets. The graphic below displays the average median price of homes sold, by week at the national level. The increase is astounding. Obviously without sales volumes it’s difficult to put this into context but for pure shock factor the chart does a good job. Some questions that come to mind are:

Understanding reality in all of its forms is critical. Stock market reality and economic reality aren’t necessarily the same thing even though that’s largely been the case historically. Whether there’s really a disconnect right now between the two or the market is simply discounting further and further out into the future remains to be seen.