So unless you’ve been living under a rock this year, you know that gold has had a pretty remarkable run. It’s outperformed stocks and bonds across the board. 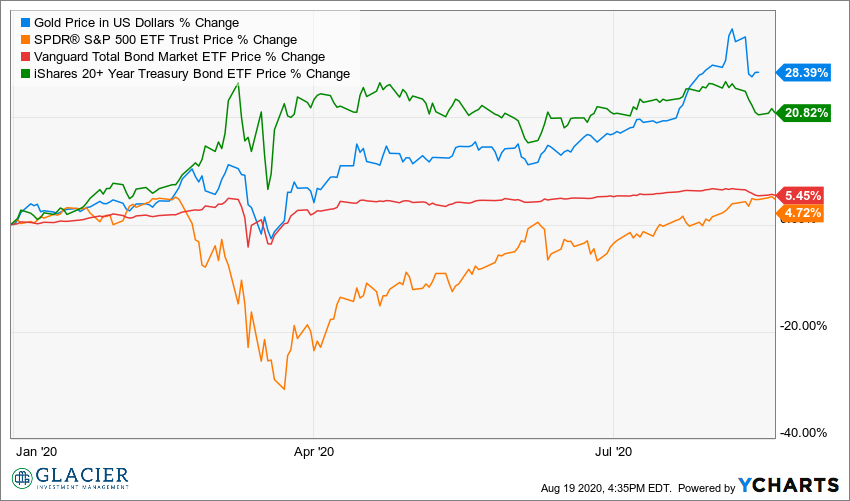 Gold, referred to as a barbarous relic by some, has its lovers (gold bugs) and its haters. Gold doesn’t produce cash flows like a typical security does so it makes it difficult to value. The price is very much sentiment driven versus fundamentally driven like stocks and bonds (although it can be argued stocks, bonds and all publicly traded assets are more sentiment driven than fundamentally driven), which means gold analysis can be ambiguous and squishy (there’s no DCF or hard analysis).

Gold is often considered attractive because it is a store of value, which takes on increased importance in a  world where currencies are being debased (losing their value to purchase things) daily. Gold can also serve as a hedge to a lot of different things that can go wrong. My intent in this post is not to make a case for gold but to discuss some of the possible catalysts that have driven the price of gold in 2020 and to put the current gold price in a historical context. In full disclosure, I have significant gold exposure in my portfolio and in the portfolios I manage for clients.

Depending on who you talk to, gold moves up and down for different reasons. To me, the chart below does a tremendous job of explaining the movements in the price of gold. Movements in real interest rates appear to be a clear driver of the price of gold. I’m not saying they’re the only driver but they sure appear to be a big driver over time. Declining real interest rates usually imply weak and/or weakening economic growth. Negative interest rates are the extreme where monetary policy makers are discouraging saving and attempting to motivate banks to lend more money to spur economic activity to avoid a deflationary spiral where money is hoarded, often leading to a further drop in economic activity/growth and prices. This hoarding and decline in economic activity and prices become a self-reinforcing cycle downward.

I’m sure there are other factors that drive the price of gold that I haven’t considered here. This isn’t meant to be an exhaustive analysis of the drivers of the price of gold. Those that I have discussed today are among the more relevant today, in my opinion.

As I mentioned earlier, it’s hard to value gold because it doesn’t have cash flows. That’s also a beautiful thing because very few assumptions are required. When thinking of allocating a portion of an investment portfolio to gold, it can be beneficial to look at the price of gold relative to other portfolio alternatives. Since gold is a risk asset, it makes sense to compare it to stocks. In the chart below, we compared the price of gold to the index level on the S&P 500. As you can see, the price of gold relative to the index is at 2007 and 2014 levels, which is a pretty attractive level if you think there’s a chance for gold to approach previous peak levels relative to the S&P 500. There’s no guarantee those peak levels will be achieved again so that shouldn’t be the sole basis for an investment thesis in gold. That said, combining this value perspective with real interest rate trends, money supply growth and an array of other potential future risks (currency, geopolitical, etc…), gold could appear very attractive here in spite of the run up this year. However, one of the recurring thoughts that continues to cross my mind is whether all of these expectations are already reflected in the price of gold. I think you have to realistically consider this possibility. I know the gold bugs are all bulled up and I think there’s a lot of validity to the bull case for gold, but has it already played out? 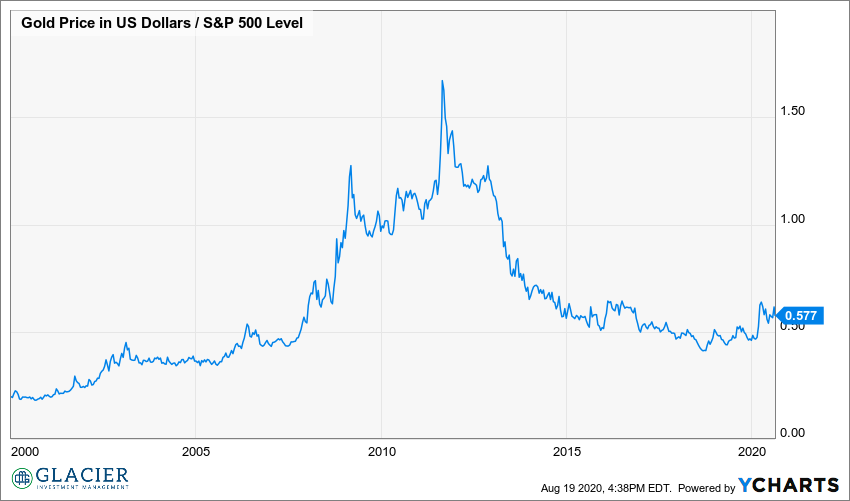 While gold has had a great year so far, it’s important to not fall in love with it because it won’t always outperform. As a matter of fact, it can underperform for long periods of time. While attempting to time the market is a fool’s errand, certain steps can be taken . Rebalancing is one way in which you can capture some of the gains. Being flexible in your allocation is potentially another way. Investing isn’t easy and requires a lot of discipline on top of a sound plan and execution. Gold is no exception.