In my last post, I discussed the relative unattractiveness of bonds over the medium to long-term. Specifically, I questioned the ongoing diversification benefits of bonds given current interest rate levels. One counterpoint I failed to acknowledge was convexity. Convexity is a more advanced bond concept having to do with how bond prices react to changes in interest rates. Convexity can be a really good thing. A bond with greater (positive) convexity will experience higher price appreciation for a given decline in interest rates than the resultant price depreciation it experiences when rates increase. In other words, bond price reactions to changes in interest rates aren’t linear. The impact of convexity is significant when rates are low. Bonds with higher convexity experience meaningful price appreciation in a low rate environment. We witnessed this phenomenon recently with the long bond’s strong performance during the February/March decline in the stock market. Long rates compressed 138 basis points (1.38%) while long-bond prices appreciated by 26%. It’s tempting to chase that kind of performance. It could pay off if we have another sharp drop in the market, which is conceivable given the uncertainty surrounding the current pandemic. I’m inclined to balance that view with a view that longer-term rates could begin backing up more than the market is anticipating. 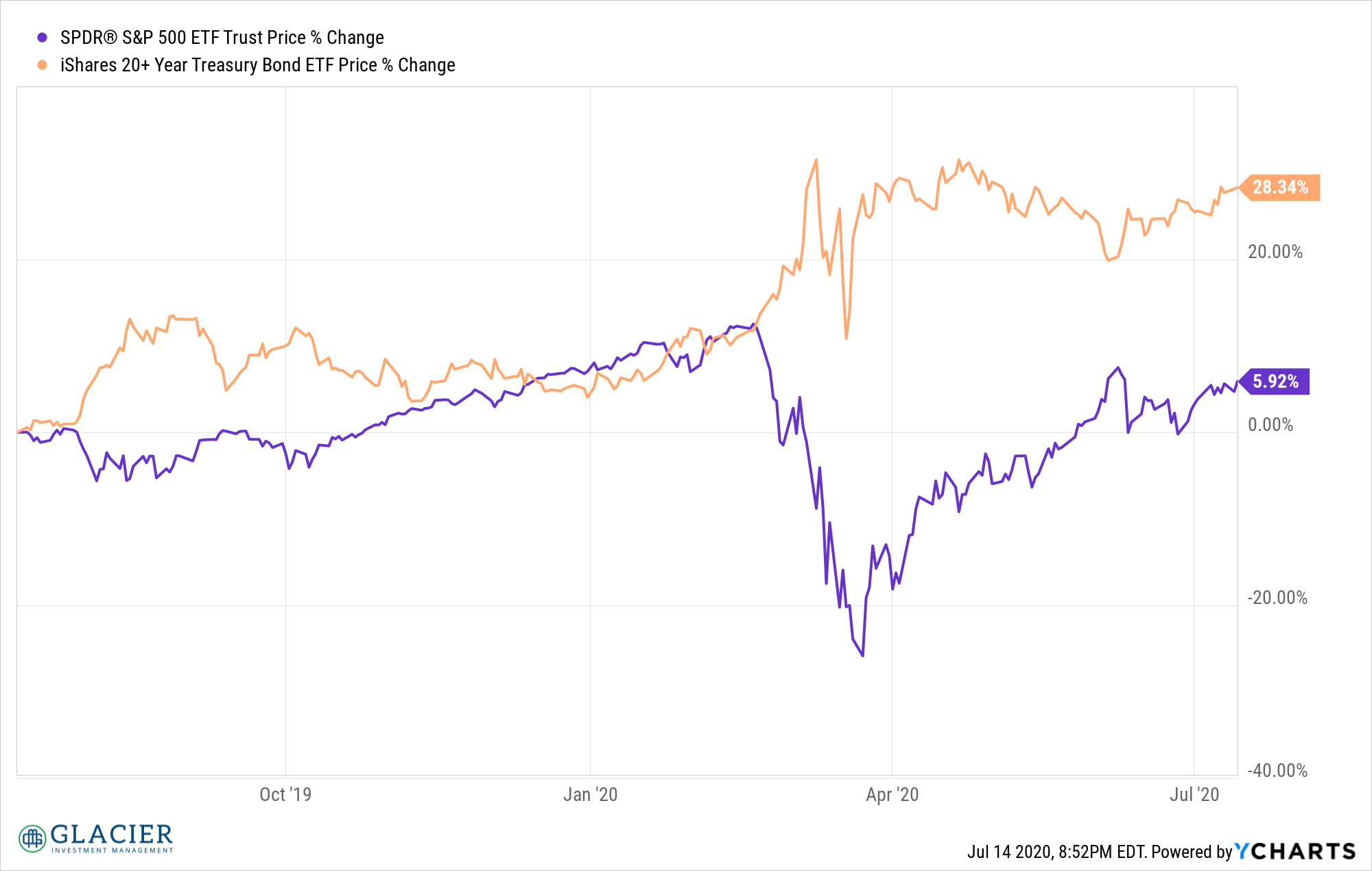 Long bonds appear to have served their purpose during the fallout in the equity markets earlier this year, but long bond prices noticeably dropped in March as the panic induced decline in the stock market intensified. This convergence of long bond and stock performance during a market rout raised some eyebrows and caused quite a bit of consternation among leveraged bond investors. Increases in asset price correlations during times of panic are not uncommon, but the way rates backed up in direct response to central bank and government intervention is noteworthy.

The case for higher rates

We appear to be at or near the bottom of the current long-term interest rate cycle, suggesting the medium to long-term trend in rates is likely higher. There are a lot of undercurrents that seem to be suggesting that we may be at or nearing an inflection point to a more inflationary environment. Factors including de-globalization, constrained supply chains and a declining US dollar could lead to higher prices on many goods and services. Higher than expected inflation (not hyperinflation) isn’t good for bond portfolios, especially the long bond portion. In addition to higher than expected inflation, substantial increases in government debt are another potential source of higher rates. Long bond rates bottomed on March 9 and then noticeably marched higher from there, as mentioned above, in response to the Federal Reserve’s and federal government’s efforts to stabilize the economy and investment markets. While the future can’t be predicted, the case for higher rates is becoming increasingly more compelling.

Market expectations currently appear to be pointing to a more inflationary environment in the medium to long-term. 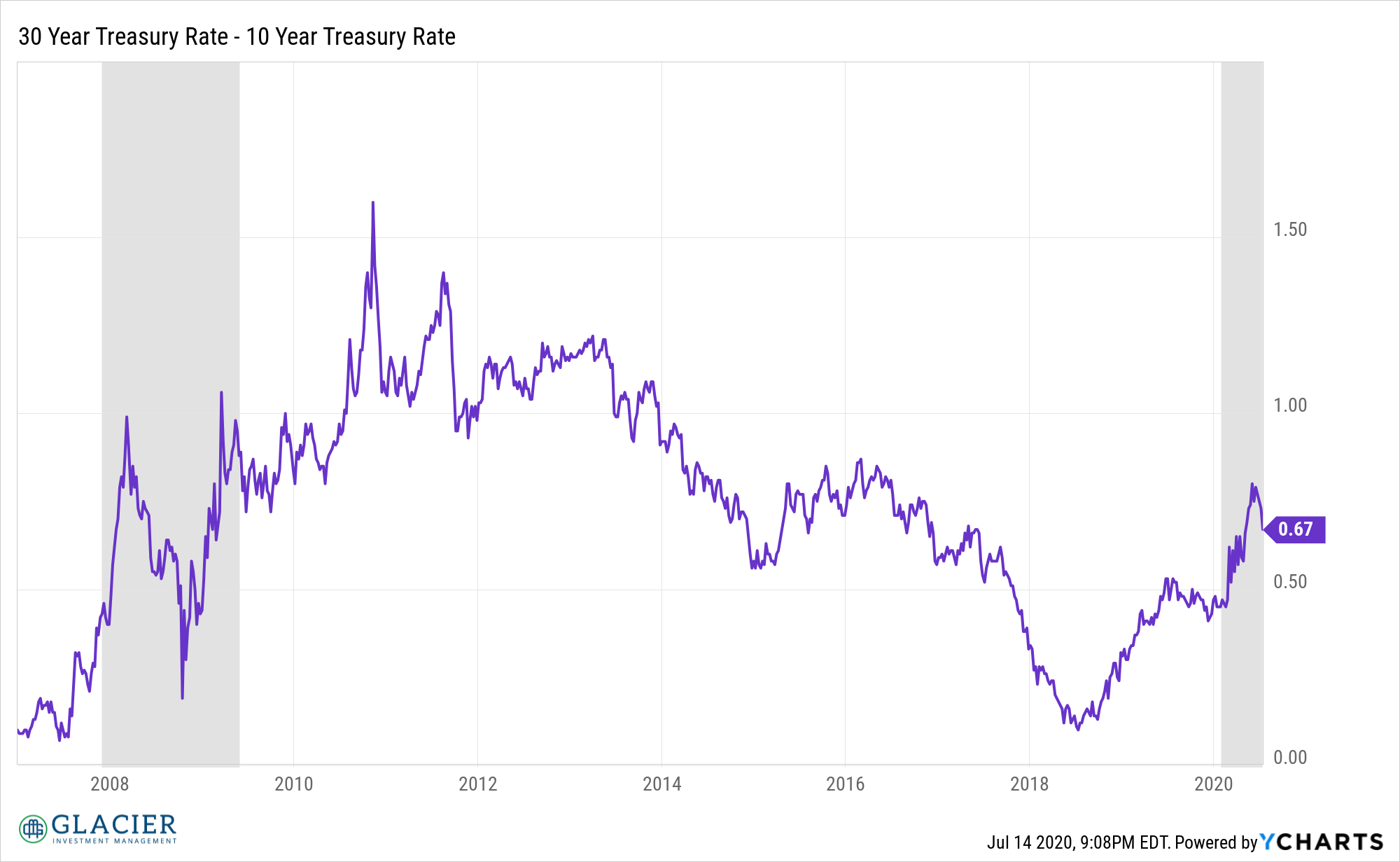 Bonds play an important role within investment portfolios. Rethinking bond allocations in the context of higher than expected inflation and higher government debt makes a lot of sense right now. Reducing or shifting bond allocations in response to extremely low rates and the prospect of higher rates in the future may be the best course of action if other viable alternative return streams can be found.