It’s funny how life happens. We go through these long periods of stagnation and monotony and then we have these shorter periods of abrupt  change. Think of the months and years leading up to the fourth quarter of 2018. Everything was pretty much moving up and to the right. Sure, there were bears at the time preaching doom and gloom but there are always bears. Rather suddenly, and unexpectedly to most, the stock market corrected sharply over the course of nearly three months. The bounce from the December 2018 lows occurred fairly sharply as well and was marching along without interruption until we got to February 2020.

After a 34% drop in the S&P 500 from peak to trough to a nearly 32% bounce off the lows (the bounce back up only represents 61.8% of the actual decline), we find ourselves in an interesting environment. The S&P 500 has recovered 711 of the 1,149 points it lost. The US economy is just starting to reopen after being shut down for two months. Many fear the depth and breadth of the inevitable recession with some claiming it will be a depression. In spite of these fears, the stock market has continued to climb higher although most stocks have not been participating in the rise. Additionally, the RSI (relative strength index) has leveled off without ever reaching an oversold level in the recent rally, potentially implying this has been a bear market rally. For those that don’t know, a bear market rally is a shorter-term rally in stock prices within the larger context of a down-trending market (bear market). 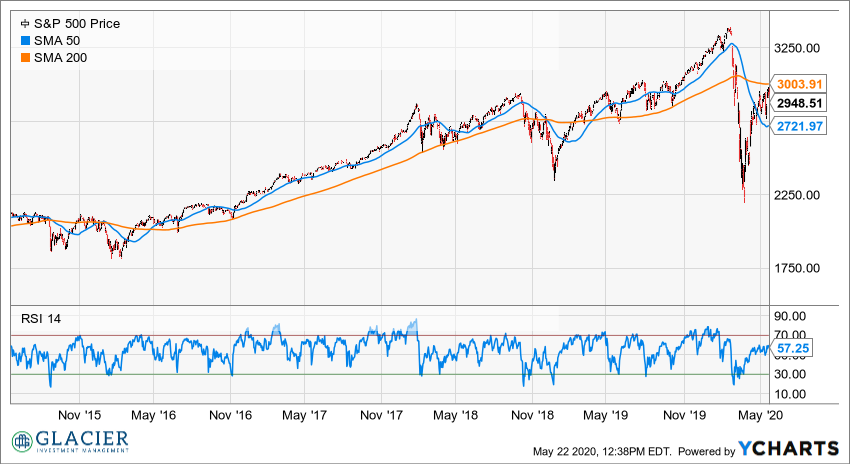 From here, my guess is that the stocks are going to take a breather to digest the recent gains in the context of the impact of incrementally new information on future expectations. There’s a lot of optimism about vaccines, the economy reopening and a sharp economic recovery on the positive side while there’s concern about future outbreaks, prolonged shutdowns and/or future shutdowns and a long, drawn out economic recovery on the negative side. A lot of smart people still expect the stock market to re-test the March 23 lows, if not go lower. Anything’s possible, but it seems like there would need to be a pretty strong catalyst from here to push the market back to those levels. Something like another COVID-19 outbreak or a deeper/longer recession than is currently expected. Without that type of catalyst, I’m thinking the market probably isn’t going to be dropping dramatically to the downside again, in the near-term, like we experienced in February and March. Anything is possible though.

Currently, there are a lot of dire forecasts and expectations out there. A counter to the dire forecasts is something I’ve seen at various times in different contexts and was reminded of again this week is the expression, don’t bet against human ingenuity, which is really resonating with me right now. Whether it’s climate change or COVID-19, pundits and the media seem to expect the worst and play off of our fears. Fear is among the strongest of human emotions. Admittedly, I’ve fallen into the fear trap before, which has led me to avoid the mainstream media as much as possible and to be highly skeptical of the information presented to me. I personally feel pretty positive right now. There are a lot of exciting new technologies and developments that are going to be amazing. I can’t say how impactful these new technologies and developments will be but they remind me of how resourceful, creative and ingenious humans are. The road back to “normal” or to the “new normal” is sure to be bumpy. Nothing in life is ever a straight line up. While we still have tight risk controls on the portfolios we’re managing, we’re open-minded about the future and the potential for the trend in the market to continue to improve from here. To clarify, this isn’t to say we won’t have 10-15% dips in the market. It simply means that I think, based on current information available, the upward trend will continue, or reestablish itself, until the facts change and become sharply and abruptly more negative or start flowing and trending in an increasingly negative direction. For now, the facts are less negative and/or are not worse than expectations. Sentiment, if not improving, has stabilized at a much higher positive level than where it was two months ago. There’s reason for optimism even in a virus-ridden world.

Small cap stocks have been struggling for a while but have gotten some traction recently. This would be a positive sign for risk assets if the trend in small cap stocks continues to improve. 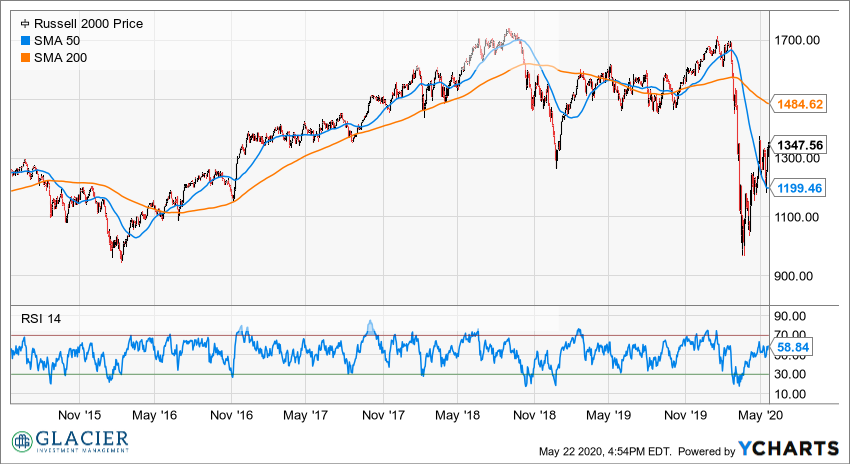