The market continues to defy expert expectations. The economy is in dire straits and will likely get worse before it gets better seems to be the view. While the stock market is not the economy, it tends to reflect the economy in many ways, especially growth and growth expectations. With today’s astonishing GDP print, nobody seemed to be too bothered or taken back by it. Of course nobody was too concerned because everybody was expecting a very negative range and -32.9% was within that range. Actually it was better than the consensus expectation. I’m not sure -32.9% is really that much better than -34.1% though. 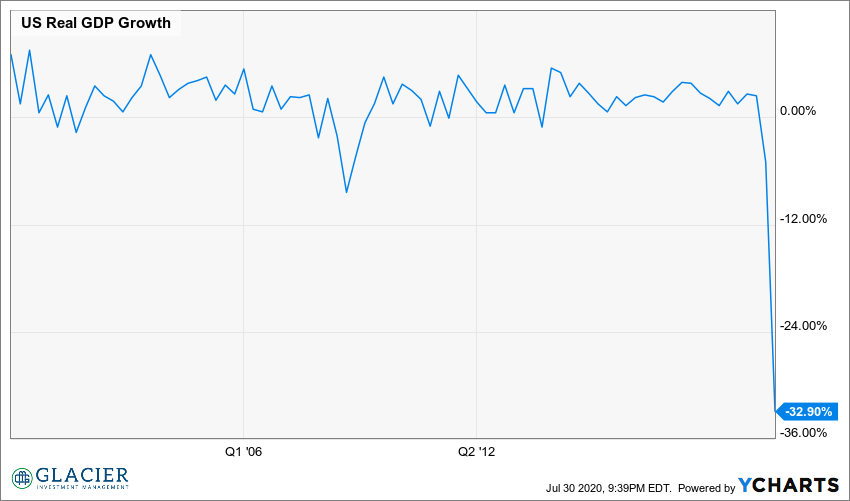 Most economic fundamentals continue to suggest the economy is in a major funk but the stock market continues to climb. That’s because the stock market is a discounting machine that is looking well past the present and pricing in a recovery. Whether the expectations currently priced into the market will actually occur is unknowable now but the market will continue to adjust as additional information is received, processed and projected out. As the election nears, we will likely begin to see certain sectors react to the expected outcome of the election. For example, sectors thought to be negatively impacted by a Democratic president and/or legislature will likely begin to underperform if the market believes there is an increasing likelihood Joe Biden wins and/or a Democratic sweep occurs. It’s not likely we will see an election driven dramatic sell off, in my opinion.

After the sharp sell-off earlier this year, many were expecting another sharp sell-off for various reasons. I don’t think we will see a sharp sell-off this year because of COVID or because of the presidential election. I also question whether we will see a sharp sell-off due to the economy. It’s likely the market would slowly sell-off if expectations for an economic recovery were to worsen. For now, the market is in an uptrend and unless there is something there to cause that trend to reverse there really isn’t a reason to lament over where the market is or what it’s doing. Frankly, there’s quite a bit of expected support in the form of the Federal Reserve and the federal government. Unless the well the dries up, it’s likely the market will move higher from here for the time being.

So what are the negative catalysts that could cause the market to break trend and move down from here? The most obvious to me is if the liquidity being provided were to be substantially reduced or eliminated all together. A weakening of expectations for an economic recovery would also likely lead to a gradual change in trend from positive to negative. Beyond those two, your guess is as good as mine. Of course, social unrest as a result of the ongoing political and social strife in our country could lead to market volatility and even a sharp sell-off but it’s hard to believe it would lead to a major change in trend unless things got really bad, which they could. Social unrest causing stock market turmoil is not a zero probability catalyst. A war with China or another perceived foe could lead to a pretty dramatic reversal I would imagine. The thing is, the most impactful negative catalysts will be those nobody is anticipating. It doesn’t mean nobody is talking about it. It simply means it’s not on anyone’s radar as being reasonably likely. We have to use our imaginations and not be too dismissive of potentially outlandish scenarios.

Note: I’m in no way suggesting the stock market is an attractive investment at this time.